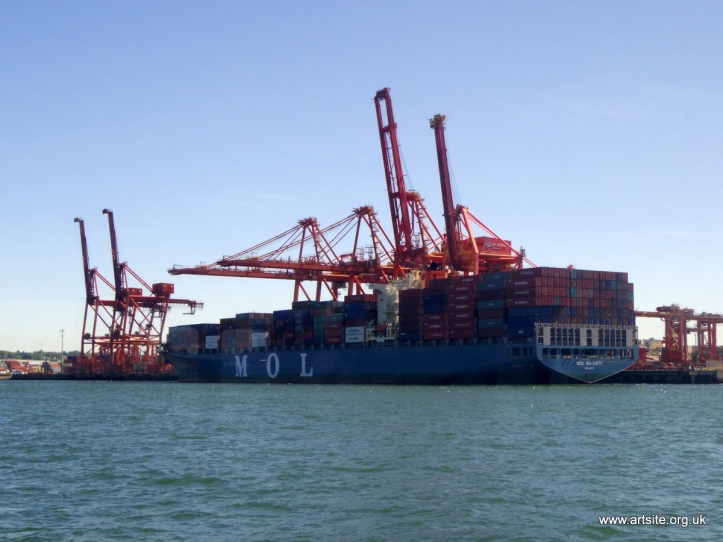 above, Vancouver port – seen from the Seabus

I was raised in the west coast port city of Vancouver. Quite a few years ago I left to go traveling and I ended up in London UK, to become one of the many millions of the world’s flotsam and jetsam that have turned up here to create an amazing polyglot city that bursts with energy and intensity 24/7.  London’s home now, but every year I go back to Vancouver and rekindle my love for the city, a love that flourishes during the city’s splendid green and blue summers, but surely wanes a bit when the darker days kick in. I havent lived in Van since 2002 and every summer i think “why don’t I move back here” but so far I haven’t.

This year I thought I’d write some reflective blog posts about my trip and my perspective on the city.

This palimpsest sums up the state of the city today: the city’s historic core, for decades left to rot and malinger due to a combination of corruption, dodgy landlordism and local culture, has been “regenerated” – to some extent – largely of course by the usual process of “development” that is, putting homes and services  for rich people where previous poor people eked out a marginal existence.I’m not really sure how this qualifies as “development” but in these days our definitions have got out of whack:  a “friend” is someone you don’t know and don’t want to meet in real life, and to “like” something means to absentminded click on a  link in a desultory manner, I guess facilitating the good life for the rich at the expense of the poor qualifies as development. I digress.

It has never been a rich part of town:  adjacent to the port it was a transient district of sailors and port workers, many living in rooming houses and hanging out in the bars and pubs. I used to go to punk shows there back in the 80s/ early 90s, it was edgy and fun but it never felt unsafe (or I was naive in the way only kids are). From the mid 90s  it got really run down.

I won’t lie: the Downtown East Side is much more pleasant to visit now than it was in the 90s or early 2000s, when it was a seething horror of a place, so vile that a monstrous serial killer  operated. Yes, in those dreadful days a pig farmer used to wander the streets of the Downtown East side and pick up poor, often drug addicted  women and take them back to his pig farm where he killed them and fed them to the pigs. What is so horrible is that he did it with impunity for years and years and nobody  – least of all the police – noticed because everyone in Vancouver had simply decided that if they ignored the Downtown East Side and its people, they could live happily ever after. I dunno maybe Pickton dd the city a favour, it forced everyone to confront the reality of what was happening. Or maybe not.