a white poppy for today 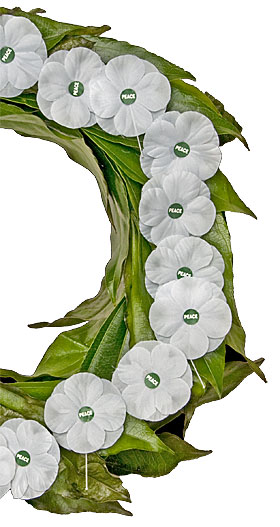 Today is Armistice Day, also known as Remembrance Day, and it is the day which was set aside on the memory of those who died in the first world war. It is also used to honor those who died in the second world war and subsequent wars, because unfortunately, WW1 led fairly directly to these other wars. The first world war was a dreadful imperialist war that not only that ravaged the northern European landscape, and destroyed hundreds of thousands of lives, but also dragged huge numbers of people from around the colonial empires into the fray where they lost their lives. If we can concede that the Europeans who fought in the war perhaps did so to defend their home soil, which is understandable, we cannot see the sacrifice of the lives of the colonized is anything but a dreadful, pointless, meaningless and utterly cruel waste.

When we think of World War I we think of Flanders fields, the poppies blowing in the breeze and white crosses. I’ve never seen it, but it’s a poetic image, which brings tears to the eyes. However, what we often don’t remember is how many European and colonial soldiers’ bones lie at the bottom of the Mediterranean, in the sands of North Africa and litter the coastline of Turkey. The war graves that lie outside of Europe are usually forgotten, though often carefully tended.

The question is, how can one honor the dead, while at the same time express anger at the horror, stupidity and insanity that caused them to die?

If I think of the first world war,  I think of my family: a foolish young boy who ran away at the age of about 14, and signed up. He  actually got shipped as far as France before somebody realized that he was a child, and shipped him home again. (It is said that so many of the English recruits were so debilitated through poor food and bad housing that most of them are actually unfit.) However, closer to the end of the war they were willing to take just about anyone and so the foolish boy went back and managed to get a body full of shrapnel. He survived, and came back a ‘hero’, married, had children, a job. He was well known as an amateur singer and general jolly soul. Until one day he woke up and he was unable to move his body from the neck down, completely paralyzed. The doctors worked out that the shrapnel had not been completely removed, and over the years it worked its way into the spinal column. And this is when his wife, my grandmother, received that wonderful utterly British phrase ‘I’m sorry it’s not our problem.’ Yes, the government decided that, for whole host of reasons that it concocted, the injuries were nothing to do with them, and they gave him what I like to call the ‘English Sorry.’ The ‘English Sorry’ is a way of apologizing that clearly contains no apology whatsoever and simply brushes you off. You hear it all the time when hospitals kill people, when gov’t departments ruin lives. The upshot of it is that my grandfather died a few years later, and his children were fatherless.

Meanwhile, on the other side of Europe, from 1914 to 1918 a young woman sat in what was then the Austro-Hungarian Empire sewing her trousseau and waiting for her fiancé to come home, but he never did. In the shock and horror of a disappointed life, she resigned herself to never getting married until eventually, relatively late in life, the family arranged a marriage for her and sent her halfway around the world to marry a stranger, my other grandfather, who had managed to sit out the war by going to a part of the planet so remote and strange the war barely touched it. Was she ever happy? It’s hard to say.

It’s hard for me to be proud of my grandfather’s role in the war, because it’s very clear to see he was as a foolish lad caught up in the glamour and excitement of it,  until he was trapped in it and it was too late. It’s hard to see any other picture. Bravery, courage, all of these things, yes, they’re all very well and they should be admired. But the force behind it, the warmongering, the imperialism, the rivalry brutality, the greed, stupidity, the hubris that arrogance, the violence, the perversion of science through the use of chemical weapons, everything bad about humanity can be seen in the first world war. What did we learn from it? Ee learned to be ever more brutal, more venal, stupid, more warmongering, we even found a newer and more clever way to do imperialism. It’s just sickening.

This year the British government decided to go all out and sponsor an expensive installation of the Tower of London to celebrate, if that’s the word, the 100th anniversary of the outbreak of the first world war. I seen the picture of the installation, which is a vast field of ceramic poppies surrounding the most of the tower. It’s quite beautiful, but I feel quite reluctant to go and see it. For some people it might be a kind of place to remember and to seek some solace, but not for me. The tower is actually a very appropriate place to show something like this as it was for many years the seat of authority in the country, a place of brutality, treachery and execution. A moat full of blood is entirely appropriate to the kind of state that enthusiastically participated in the war. But for me that’s not the way to honor my grandfather and my great uncles and all the other hundreds of thousands perished or were wounded, who otherwise have their lives ruined. For me the best way to deal with it is simply to make a donation to Help for Heroes, so that a person alive today can hopefully have their life  improved a tiny bit.