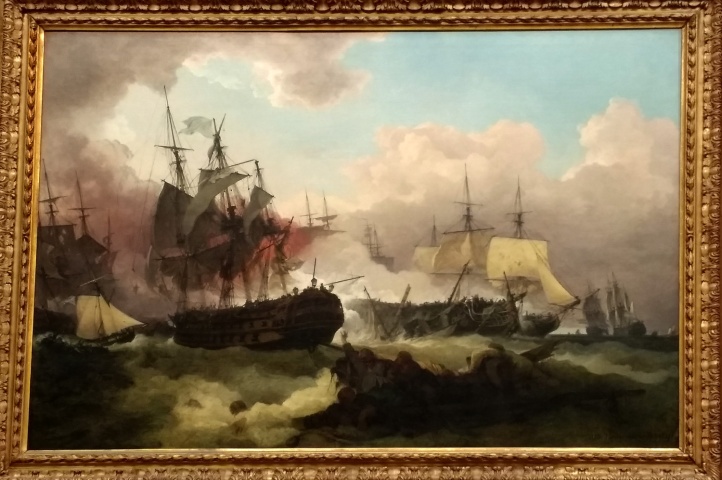 This is one of very few paintings on display in a London museum by the prolific painter and highly important innovative scenographer of the theatre, Philip James Loutherbourg (born in Strasbourg as Phillipe-Jacques de Loutherbourg, 1740 – 1812; worked in Paris then moved to London in 1771).

It is really a dreadful pity that more of his paintings are not on display, because his work is extremely interesting. Although he was highly acclaimed as an academic painter by both the Royal Academy and the French Academy (Diderot for one praised him highly) he has not come down in the Canon of art history as being particularly important; he is more seen as a curiosity – a scene designer (a bit ‘infra dig’ for many art historians) and the inventor of what is possibly one of the very 1st motion picture houses. In 1781 he invented a kind of moving painting and light show in London, the “Eidophusikon” – based on the principles of the mechanical theatre, but specifically oriented around lighting and painting. Filmmakers and film historians take note!
But his paintings themselves are very interesting because of the way in which he activates the scene and implies movement; he is also quite an unusual colourist. His pictures are more dramatic than is common in 18th century British painting, as this depiction of the Battle of Camperdown shows. He did not just paint battle scenes, but the ones he did do are really exciting and movie-like!  He made a particularly good and dramatic version of the Defeat of the Spanish Armada (1796; in Greenwich’s Maritime Museum, but criminally not on display) and a number of excellent paintings of the French Revolutionary Wars; my favourite is his painting of the Battle of the Nile (also Greenwich, also not on display – grrrr!).

Clearly, Louthrbourg’s paintings are highly cinematic not only because of his skill in painting – his ability to compose, light and colour his pictures is not in doubt – but because of his desire to embed the viewer in the picture to give the still image something of the tension and excitement of the vicariously being there. This is what he tried to do in his work with David Garrick at the Drury lane theatre, and in his devising of the Eidophusikon. I suppose the thing that first engaged me when I looked at the Battle of Alexandria all those years ago, was it seem like a shot from a film, a film that I wanted to see more of. I expect that if he was alive today he would be Ridley Scott.

I first saw one of de Loutherbourg’s paintings many years ago in Edinburgh, it was  The Battle of Alexandria (1802) , and it really stayed with me. I noted down the name of the painter and wanted to know more about him and was very frustrated to learn that although there are  large numbers of his paintings around (he lived many years in Britain), most of the museums that have them  just don’t display them, namely the Tate Britain and the Maritime Museum in Greenwich. Later, when I started researching the relationship between cinema and painting I was astounded and fascinated to learn about his work as a scene designer, which was really innovative, and his quest to create some kind of dynamic moving image, which led to his invention of the Eidophusikon –  which  has got to be seen as a stage in the development of the cinema!

The Battle of Camperdown from the Tate website:
The British fleet under Admiral Duncan engaged the Dutch under de Winter off the coast of Holland near Camperdown on 11 October 1797. After a long and closely fought battle de Winter surrendered. In de Loutherbourg’s picture Duncan’s flagship Venerable is to the left of centre and has just fired her last broadside at the Vryheid, aboard whom de Winter is seen striking his flag. The key to Fittler’s engraving of the painting identifies the British ships Powerfully Ardent, Bedford, Director, the Active cutter and the Dutch Hercule, but ship portraiture was nor de Loutherbourg’s primary concern. As the prospectus for the engraving explains, the artist’s ‘animating display’ was intended to express ‘the extent of the horror and devastation attendant upon a conflict disputed with such obstinate bravery, and so honourable in its termination to the British navy.’

That is quite correct – de Loutherbourg was interested in visual expression and expressivity, in depicting an active sublime.

If you want to see  recreation of the Eidophusikon, here is one on Vimeo Like the camera obscura, even now, after cinema and VR and all that it is still amazing and  uncanny to see!