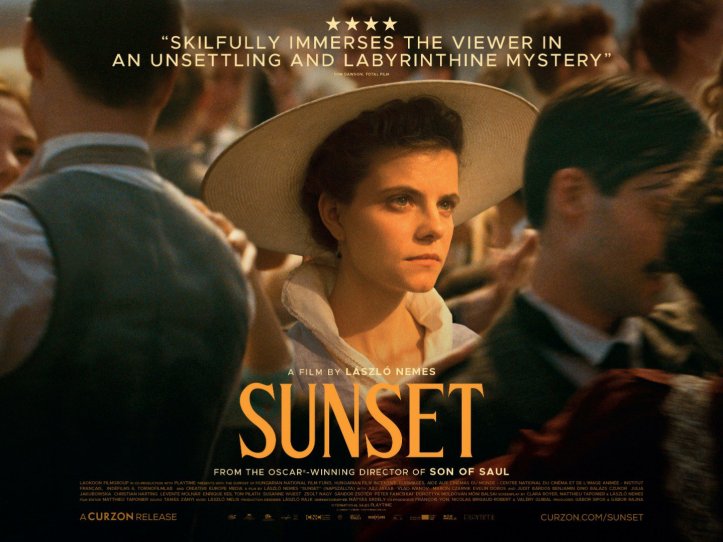 Set in fin de siècle Budapest, Sunset is a Dostoyevskian portrait of the final embers of the Austro-Hungarian empire guttering out in a maelstrom of anarchism, nihilism crime and unexpressed and inexpressible secrets.
The film follows a young woman,  Irisz , as she returns to her home city, seeking to reconnect with her past and piece together a sense of belonging. Neither she nor the audience can determine whether those people whom she meets – the courtly businessman who has inherited her parents’ shop, the beautiful shop manager, the errand boy and the coachman – are friend or foe.

And what about her mysterious brother? Is he indeed a murderous monster, or is he a freedom fighter? Can he be both? And the enigmatic, dishevelled Countess – what part does she play?

Filmed in suitably gilded tones, while suggesting the heat-haze of a Central European summer, Mátyás Erdély’s constantly moving, subjective camera hides as much as it reveals. This period drama creates wonderful glimpses like a looking glass into the past, then quickly dissolves them.

However, ambiguous as the film is, we are not confused; we understand that we are witnessing the death of something beautiful, however decaying and poisoned it may be.

Admittedly the film s long and it might be helpful to have a basic grasp of the history of the late Hapsburg empire.  But even if you don’t, Nemes’s film is immersive and compelling, and visually a delight to watch. Moreover, as Erdély pointed out in the Q&A I attended, the connections the film makes between past and present are acute, and wherever we may be in the world, this examination of power and the slipperiness of truth, is timely.

The final moments are completely devastating, and worth the price of admission alone. Seen at Camerimage 2019.