My review of Earth:Now:Being a wonderful installation project. 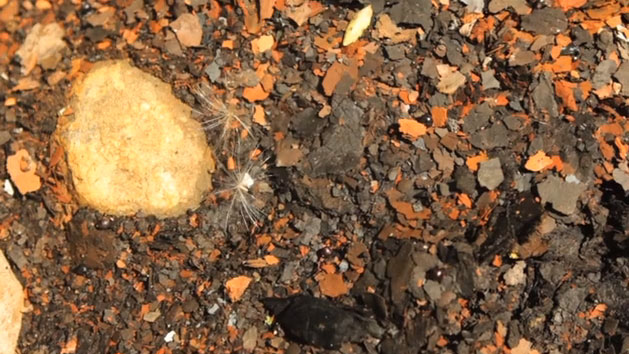 earth:NOW:being is a project by artist Valentin Manz & film-maker Christine Cynn, made at Church Farm Ardeley (a high-welfare, ecological farm in Hertfordshire http://www.churchfarmardeley.co.uk/).

For 15 weeks in summer 2010, Valentin Manz was Artist-in-Residence at Church Farm, where he created the installation / performance ‘In The Pits’. Christine Cynn documented every stage of the process, as well as the farm itself and the ambience of life on the farm, from the microcosmic insect life to the vast sweep of weather across the fields and meadows.

Sleeping in a tent and eating alongside farmworkers, Valentin built seven large sculptures out of the rough clay, which were thewn were fired on-site in paper kilns built by Valentin. Five large-scale oil paintings were installed on sheds and chicken coops around the farm.

A year later, in an exhibition at Hackney City Farm in the heart of London, Christine Cynn presented earth:NOW:being an immersive three-screen moving-image installation, alongside an installation created by Valentin in a series of box-frames, made up of the detritus of the onsite project. Flakes of ceramic and burned clay create patterns as delicate as lace; the fragments of weather-beaten oil-painted canvas create insects and strange creatures, casting magical shadows on the walls of the City Farm space.

This is site-responsive art that is bold and evocative. Existing in multiple stages, the site of reception, in this case Hackney City Farm, is redolent of nature and agriculture. The farm smell, the scent of the earth and the aroma of the nearby animals, wafts pleasantly around the room, reminding us that what see in this art work is deeply connected to the earth and our primal selves.

Christine Cynn’s moving image installation is absolutely impressive: not only does it achieve everything it sets out to do in terms og documenting the project itself in an effective, well-judged, communicative way, it goes far beyond that. Cynn has produced an installation that does what most works of this type just never do. It moves us emotionally. It is truly immersive: as the camera moves between the minutiae of the textures of the earth and the clays Valentin uses, and the cosmic rush of weather and human activity, we move along with it, on an emotional journey. The activities depicted are simple, yet packed with meaning and import, the smallest gesture or moment becomes exciting. The use of the three screens also allows the images to repeat and follow one another, in a way that is not repetitive but hypnotic.

Cynn’s cinematography is superb: the camera becomes an extension of the eye, and there is no awareness of the hand. We see into the absolute subject; it is documentary as lived experience and we are invited to live it. The senses of colour and shape, line and texture, are painterly, yet never constructed; artistic yet never manipulated. Cynn’s composition never compromises, yet always find beauty and meaning, simultaneously. The camera-work is as straightforward as one can get, in terms of telling us what happened on those days on the farm, yet its result is not a recitation of fact but is something like a song, or even a prayer.

Cynn’s work is doubly impressive when one realises that she has really been the author of her piece. She has directed, but also did the principal cinematography and with collaborators, edited the film and composed the music. Such direct, hands-on artistic endeavour is rarer and rarer these days, as industrial processes are applied to art practice and so many “artist” films are made by those who never touch a camera. Cynn’s deep engagement with the work shows her commitment to it, and reaps the reward.

earth:NOW:being deserves a wider audience than could be crammed into the Hackney City farm on a warm autumn weekend, but at the same time it also needs intimacy. I feel grateful that I was able to see it, and I came away feeling energized and inspired. Cynn and Manz have proved conclusively that art can engage with “issues” yet remain art, can be made populist (Manz ran clay workshops for children throughout the City Farm event) yet remain satisfyingly rigorous, and above all, that beauty is still a valid, viable and crucial element of art.